How the heck are ya?! Gosh, it has been FOREVER and I am so sorry about that.

Things here in NYC have just been going at hyper speed!

So I've been getting a bunch of emails from you guys wondering where I am and if I've fallen off the face of the earth! So I thought I'd take a minute to fill you guys in on what I've been up to:)

First of all: I've missed you guys. A lot. And thank you to everyone that sent me an email as to my whereabouts. Your kindness is truly what makes the world go 'round:)

OK so what in the name of Pete have I been up to?!

Wellllll...things have gotten super busy on the acting front.

I'm excited to announce that I will be playing the lead role of Autry in the upcoming TV pilot, "Heroes of the Street." It's about paramedics and it starts filming this December in Philly. So that's exciting. It's Facebook page is found here! Check it out!! :D 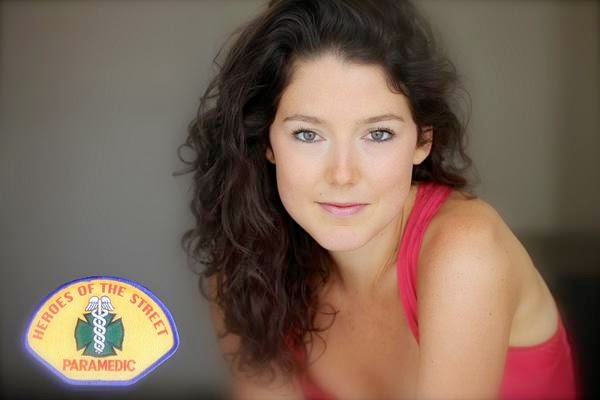 Also, I may have mentioned this already, but I was also cast in a horror film trilogy, called the Coffee Cafe. That will be shooting in 2016 in North Carolina. So exciting stuff folks! It's Facebook page can be found here! 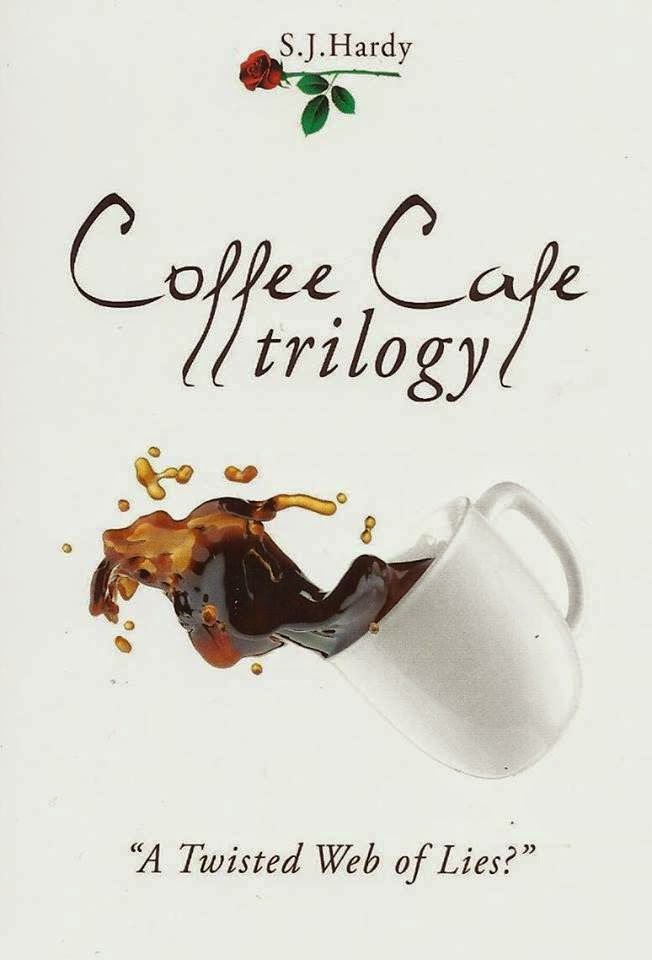 So lots of stuff going on. Annnd I finally "broke down" and created a Facebook "actor page" that I update regularly, so if you want to "keep tabs" on this gluten free gal, you can find me there as well:)  Here's that Link!

So that's the news on this front. I did a few other projects here recently too: several commercials, a role on Oxygen's "My Crazy Love," and a spot for a new alcohol delivery app called Thirstie. It's a pretty interesting idea - like Seamless but for alcohol. You can check out its Facebook page here! 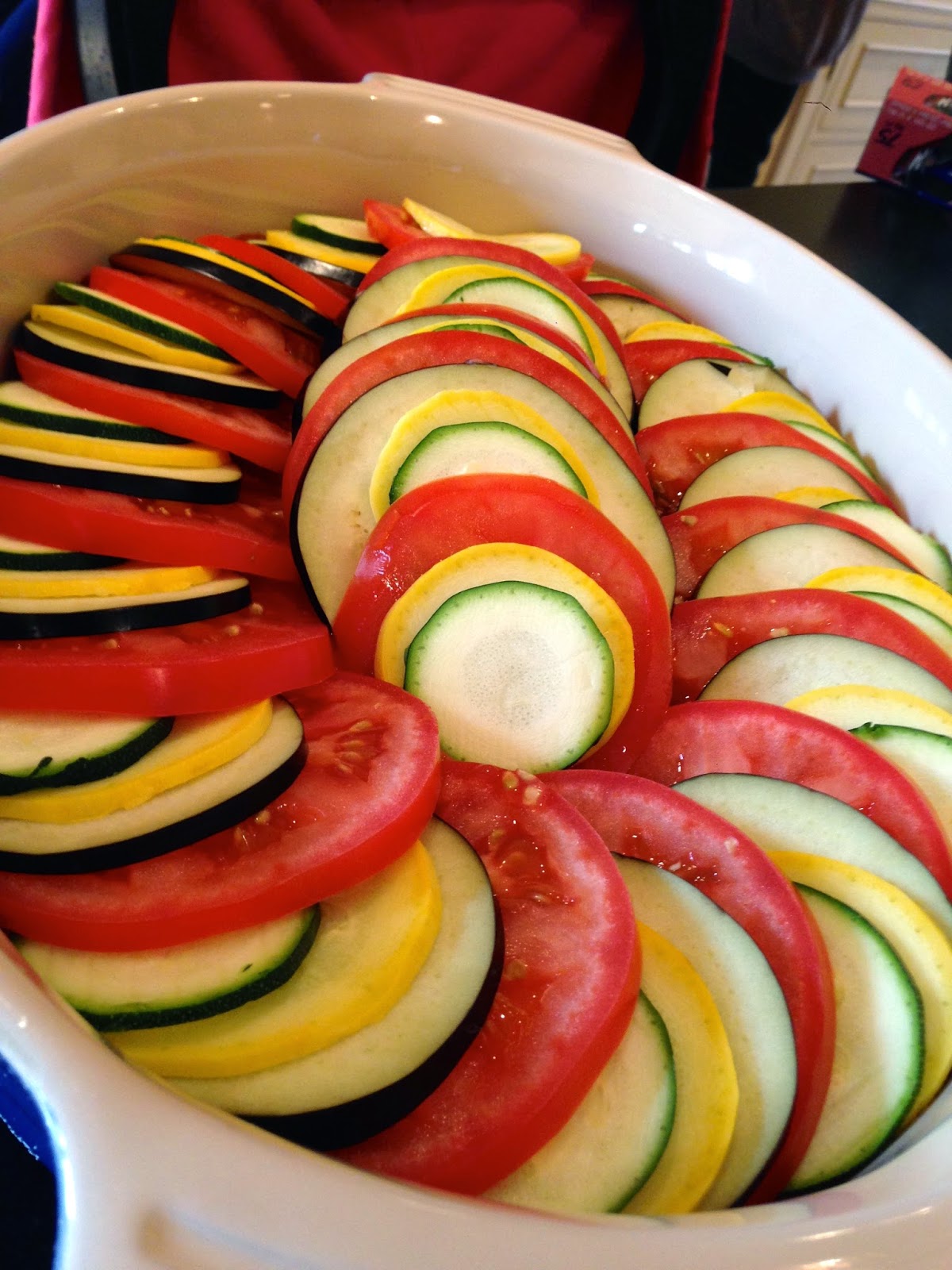 This one is actually courtesy of my sister-in-law! For Christmas dinner last year, she came up with this brilliant SCD recipe that was SO GOOD! I thought it was perfect to share with you all as Thanksgiving is rapidly approaching! 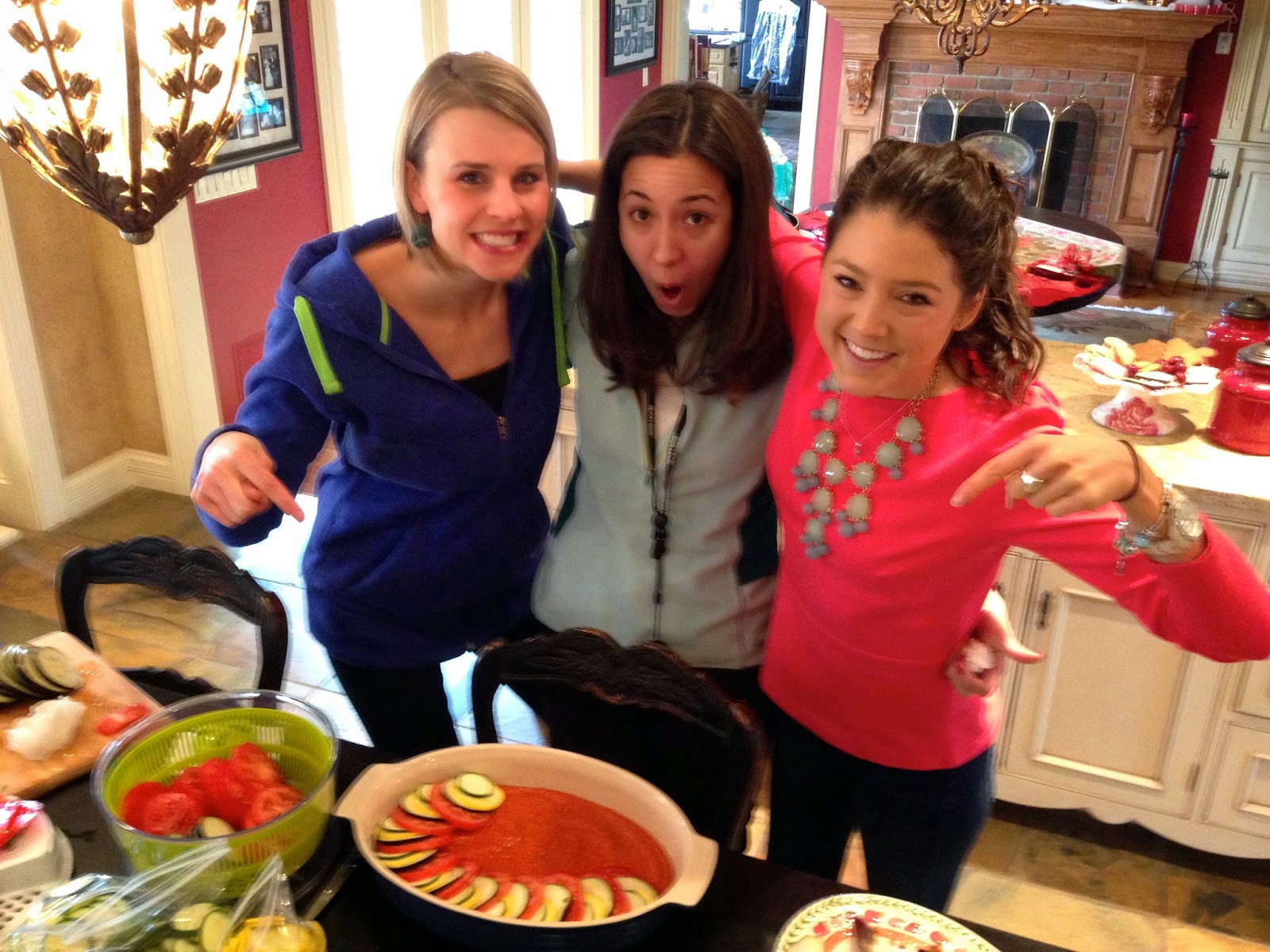 It was a hit! Layers of fresh veggies - tomatoes, eggplant and zucchini, all smothered in a delectable tomato and red pepper sauce. YUM. 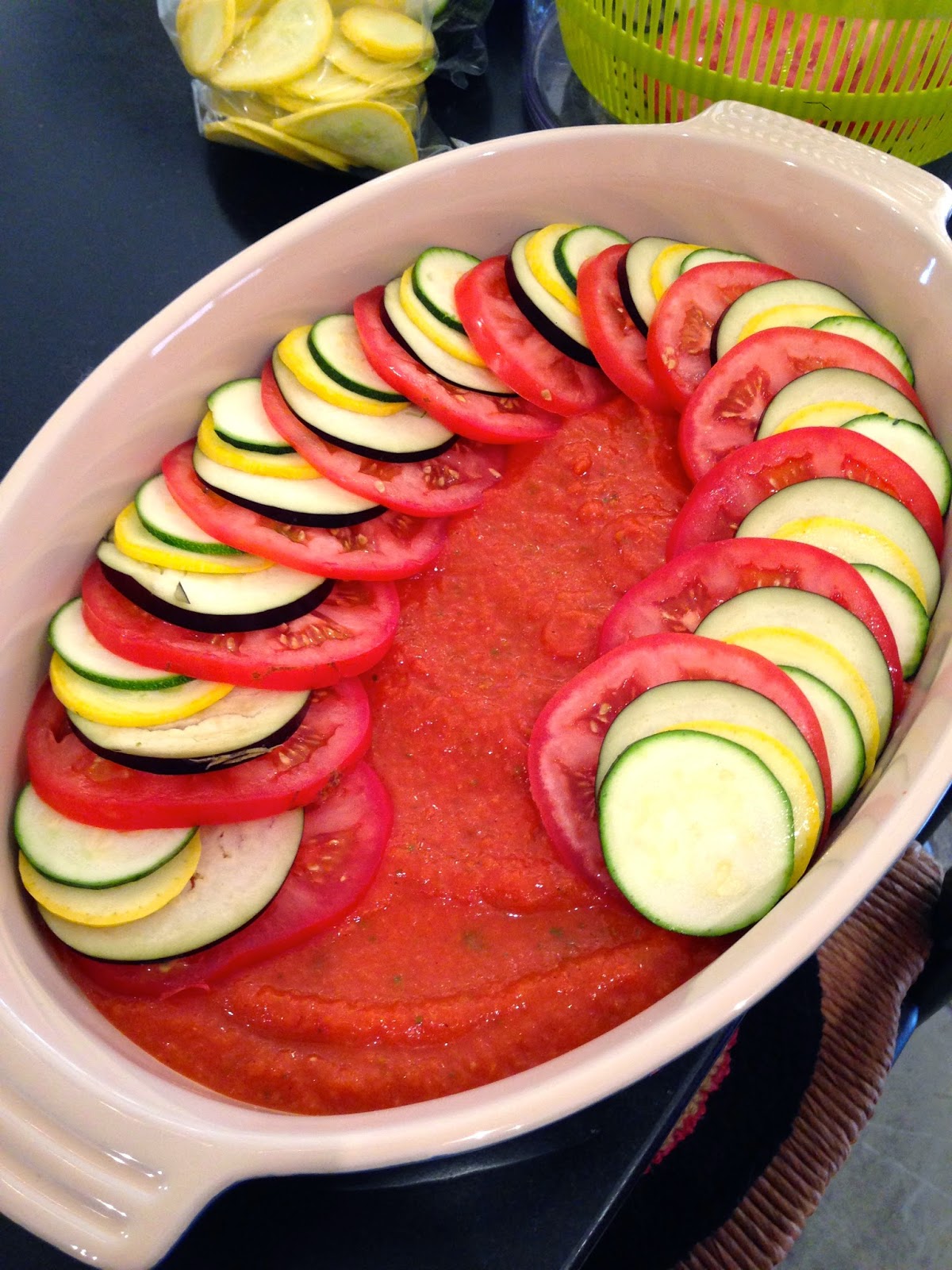 Here's what you need: (Serves 6 as a side dish)

Prep your veggies by carefully slicing them on a mandolin. (Use a hand guard!) Set aside.

Next, make your sauce. In a large skillet, sauté your onion and red pepper with your EVOO, herbs, salt and pepper for about 5 minutes over medium heat, until softened. Then add your garlic, and let it cook for about 2 more minutes. Finally, add your tomatoes, and let them cook for about 2 minutes, until warmed through. Set aside. 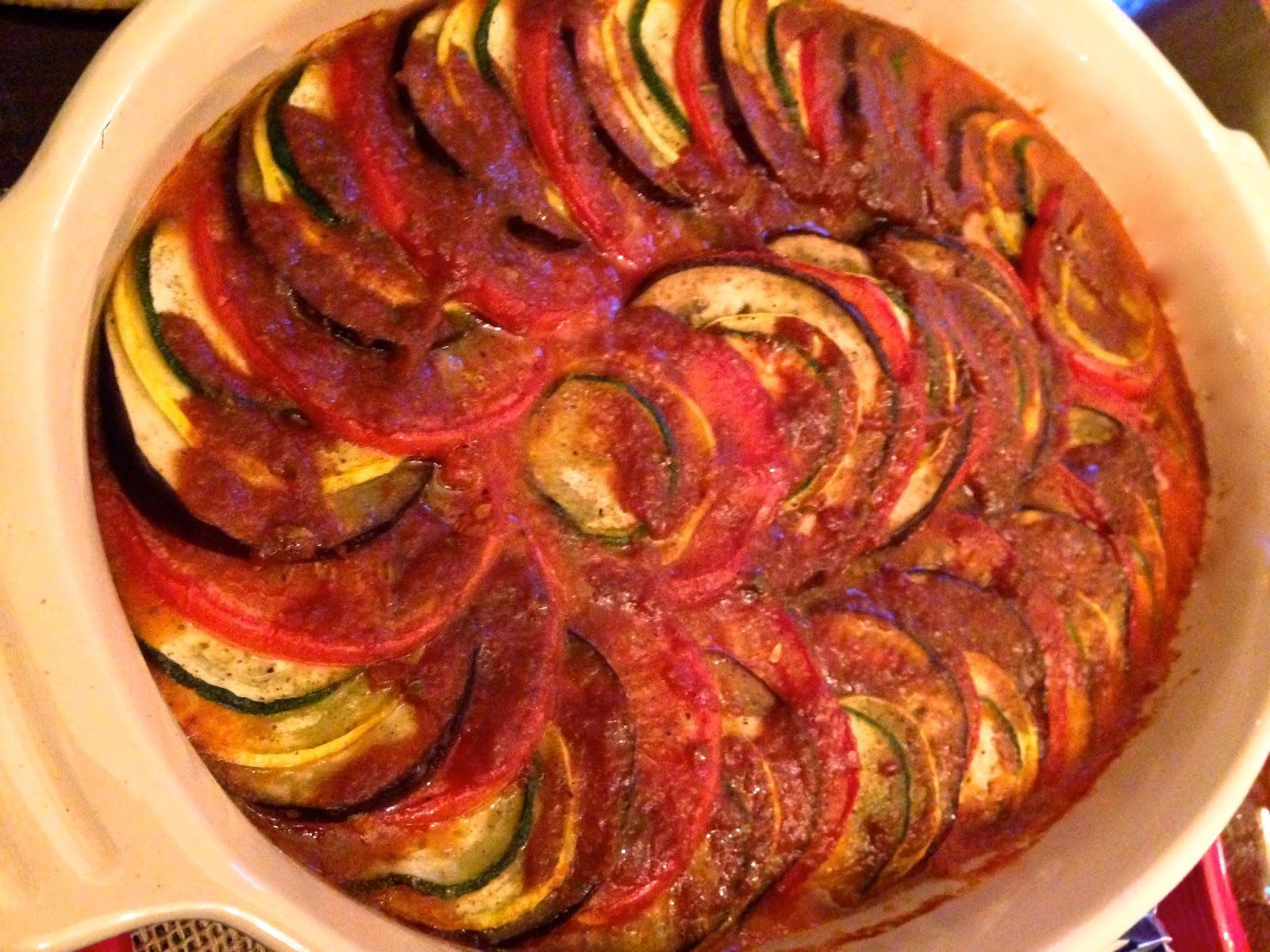 In your food processor, place your cashews. Process them for about 30 seconds, until you get a fine powder. Then, carefully add your vegetable mixture. Process until you get a smooth, creamy sauce. (You can make this a day ahead of time, and store in a Tupperware in the fridge if you're making this for the holidays.)

When you're ready to bake it, place 1/4 cup of the sauce in a large, oven safe, round casserole dish. Spread it around in a thin layer. Then, alternate your sliced veggies in a circular pattern, overlapping like so: Tomato - eggplant - zucchini - yellow squash - tomato etc. 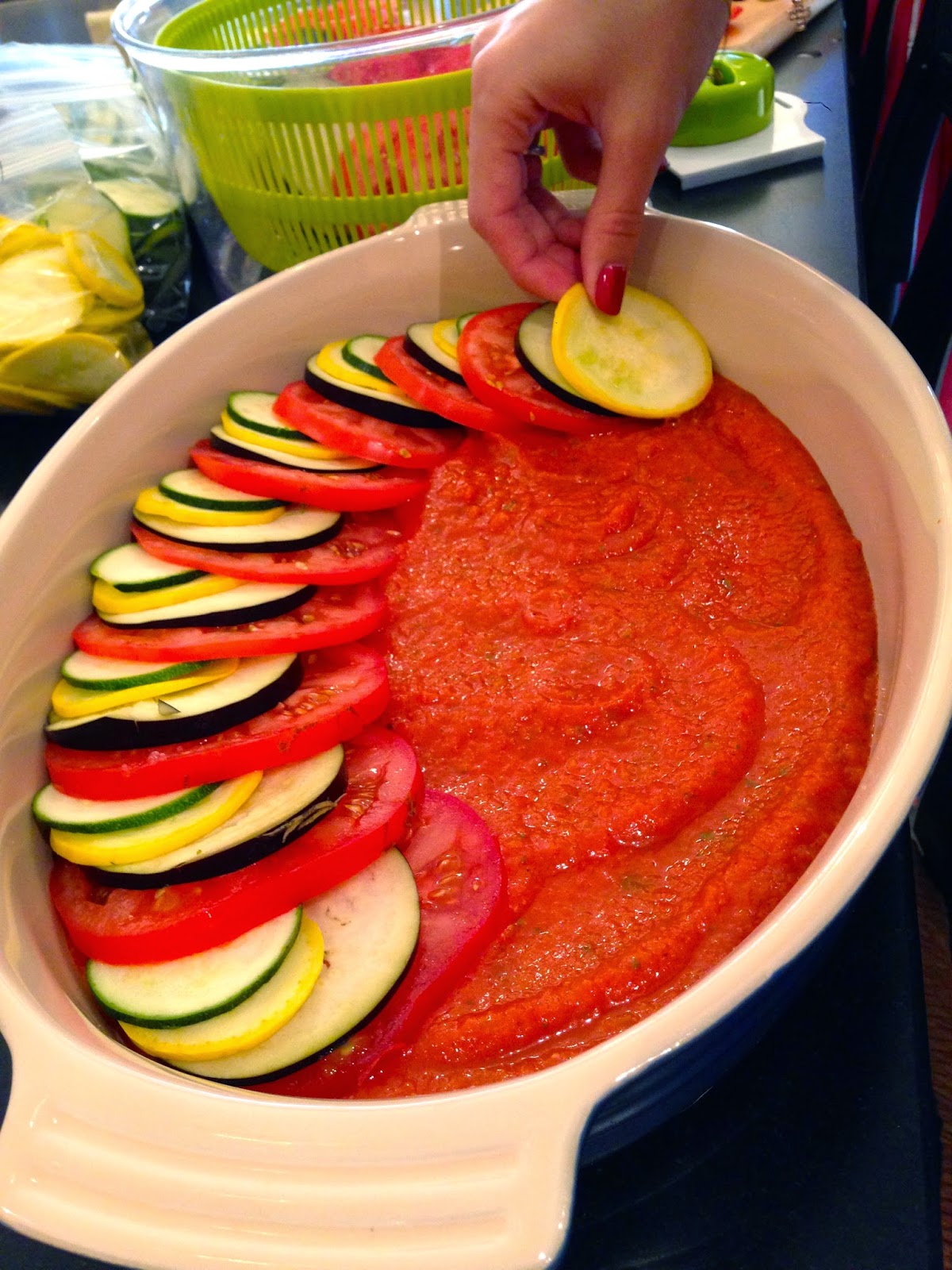 Then, pour the remainder of the sauce over the assembled veggies. Bake for about 30 minutes, until warmed through and bubbly.

* If you are not dairy free, this would be great with a little Parmesan cheese sprinkled on top. * 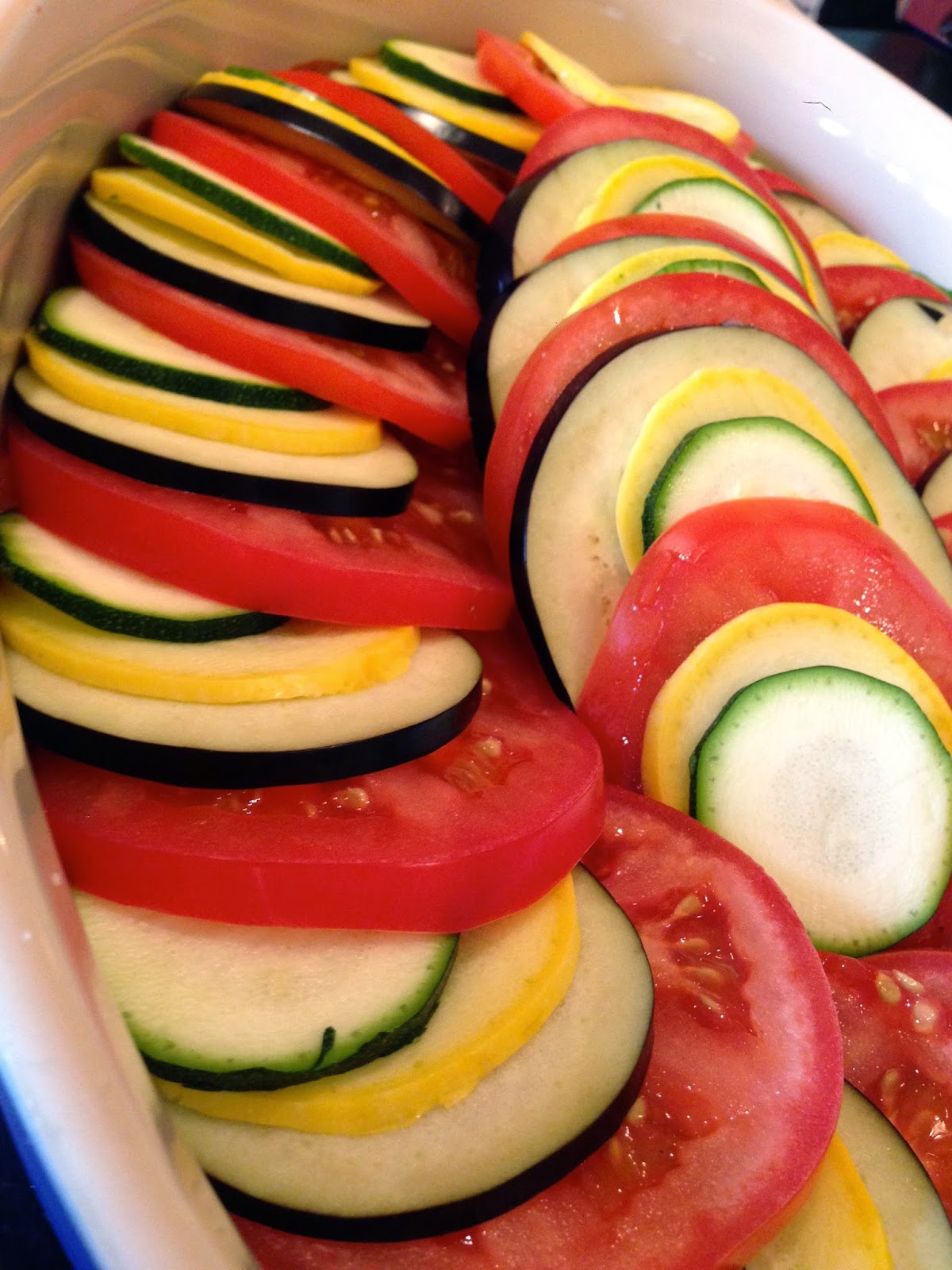 My goodness, this dish was not only beautiful, but seriously delicious, too! It was the hit of the dinner! And not to mention wonderfully healthy! 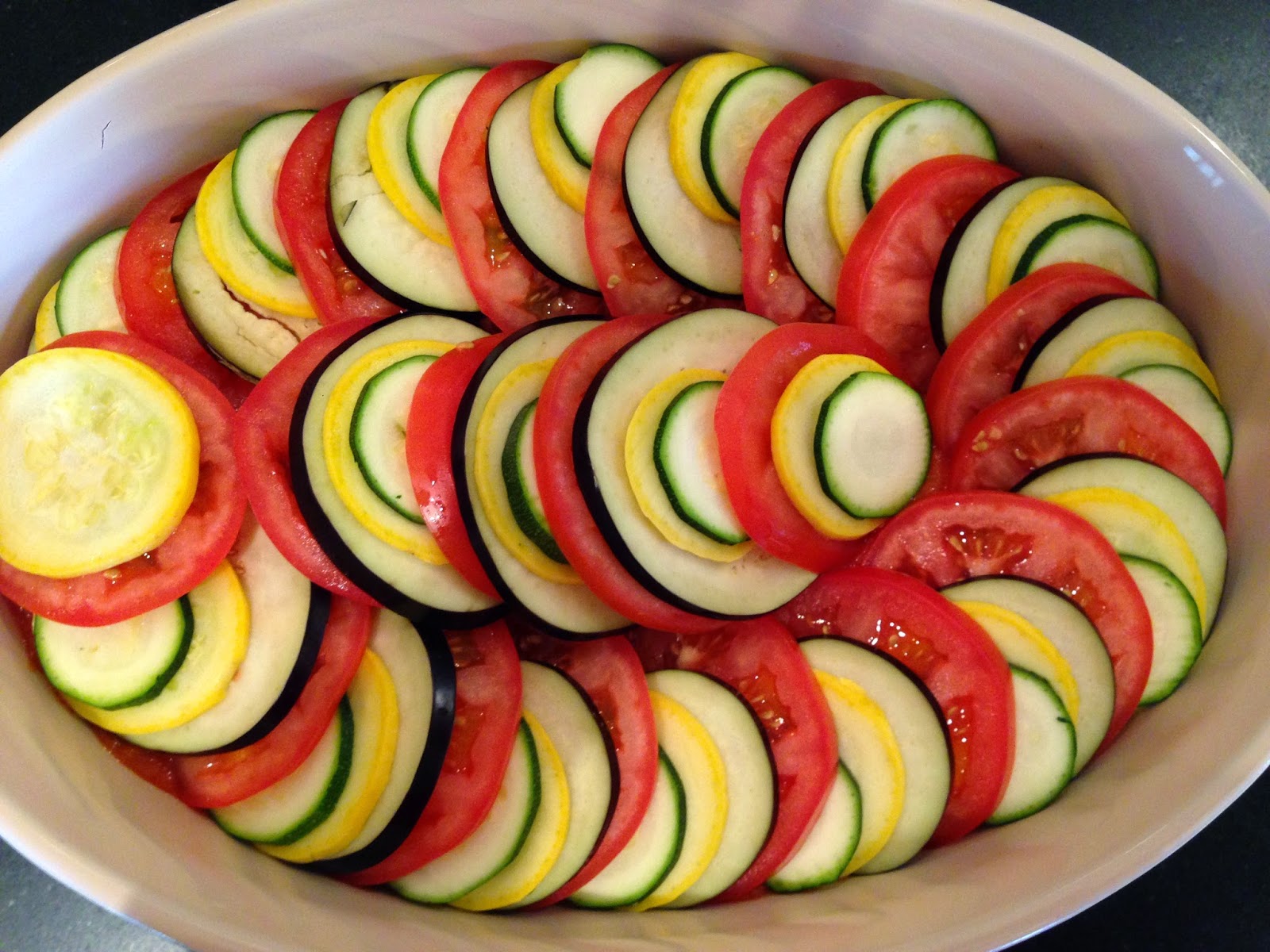 The sauce was cozy and warm with the oregano and basil, and rich and creamy from the cashews.

The oven worked its magic on the veggies - they became soft and tender. A perfect pairing with the tomato sauce! 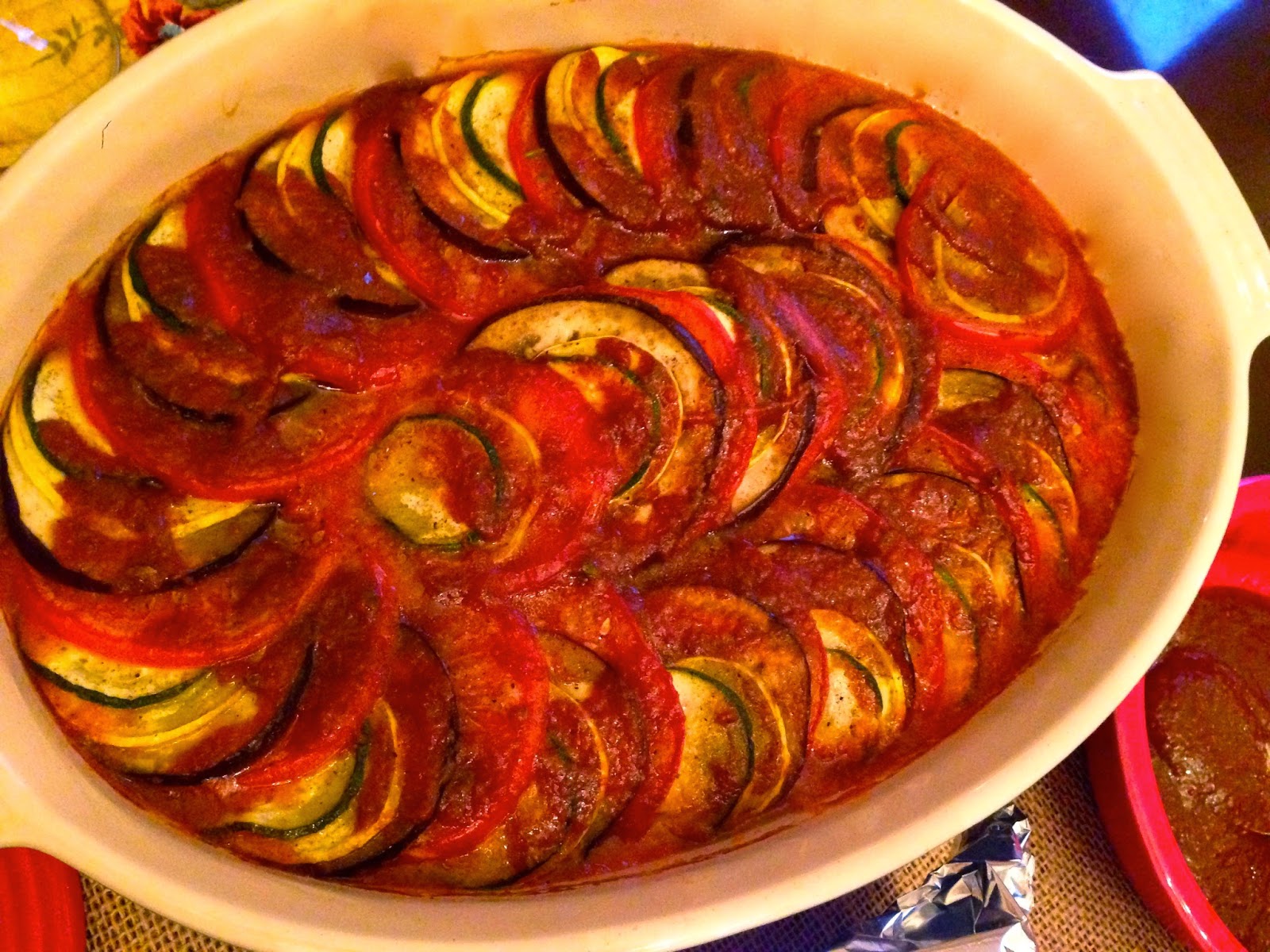 Alright that's all for now! I'm going home this weekend, so I'll be doing some cooking while in Cincinnati!

Have an amazing week!

Posted by GlutenFreeHappyTummy at 4:36 PM 2 comments: